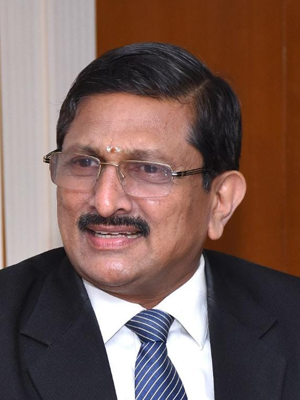 .      Prof (Dr) N.S. Santhosh Kumar is a good Academician and a good Administrator. After acquiring his post-graduation in Commerce, Public Administration and Law, he had pursued his Ph.D in Law in the area of ‘International Acceptance of Alternative Dispute Resolution with special reference to India’ and he suggested for Constitutional Amendments for making it compulsory before opting for judicial remedies. He has written many articles in prestigious journals like All India Reporter, Madras Law Journal, Labour Law Journal etc. and participated in many National and International conferences and acted as a Chair Person, Resource Person besides presenting many papers.

He has authored two books on “Freedom of Speech and Expression and Censor Scissor - Law & Justice” and another one on “Cyber Crimes - Law & Justice”. He had served as an Editor and Chief Editor of the renowned Journal of the Department of Legal Studies (JDLS) many times. He had earned very good name from the student community as a good teacher in his 26 years of teaching experience. His administrative acumen is also worthwhile to be mentioned. As he had inherited the blood of an administrator (Father being an administrator) from the childhood to till this date he is excelling in administration to that extent he had been elevated to the level of the State Director of Legal Studies and served for a longest period of Seven Years in that position, besides he served as the Principal of the Prestigious Madras Law College, the second oldest Law College in India and the Govt Law College Coimbatore. His co-ordinated activities with Judiciary, Government and the legislators led to remarkable developments in the Department of Legal Studies like starting of Seven Colleges, spending of nearly 816 Crores for infrastructural developments, introducing 10 innovative L.L.M courses in various law Colleges, appointment of nearly 130 Assistant Professors for various law colleges and served as Chairman of the Convener Committee of the Tamil Nadu Dr Ambedkar Law University for the period of 15 months, the first member of the Convenor Committee of Madurai Kamaraj University and the first member of the Governing body of University of Madras. He had served as Syndicate and Senate Member of the University of Madras, The Tamil Nadu Dr.Ambedkar Law University, Bharathydasan University, Madurai Kamaraj University, Periyar Univerisity Manonmaniam Sundaranar Univerisity, and Bharathiyar University for the period of Seven years. As an administrator, he never compromised indiscipline inside the campus and created an academic flavour inside the campus which fetched him a name as 'good administrator'. As a reward for his hard work, Hon’ble Chancellor has appointed him as Vice-Chancellor of Tamil Nadu Dr. Ambedkar Law University from 9th April 2021.